First thing I would like to say is that I am back and rolling. The neck problems continue to plague me, however I am making you a mitigated promise that a new blog should show up every week.

So what do I mean by a child's eyes? I have friends and relatives who are not fantasy readers, but love me and read my books anyway. At first when this started happening I was floored and discouraged to see that some of them had absolutely no idea what was happening in the book or what it was about. They drowned.

So I thought, maybe it is me. Am I really that unclear? Have my writing workshop buddies and other people I know been lying to me over whether or not I am coherent? So I continued conversations with the confused and discovered two things. The first, and I believe I've mentioned it before, is the importance of personae and glossaries, especially for those out of their element.

I take it for granted there are certain conventions we all know and love to create a world, and that if people find themselves lost in it, I have done something wrong. In fact, they are a handy guide for the fantasy literate, who either put down and pick up the book sporadically, or those who just love to have all the facts of the matter.

For those who don't read fantasy that much, it gives them a stable ground to walk on as they wade and then swim into unconventional waters. More importantly, however, is this: speculative readers still have a child's eyes. 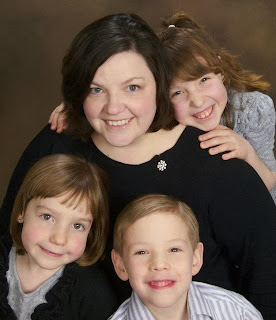 and her extremely bright and creative kids. They were at my house, and despite the fact I do not have a video game to my name, having fun due to the fact I still play with toys and therefore have a collection in the house. Nothing high tech. Plastic figurines, plush animals, a mad collection of My Little Ponies (and I know you know why) and lots of grown up toys such as crystal balls I inherited from my great grandmother and Native American carvings, which I also let them play with.

Now of course one of the reasons for the visit is that Marci just moved closer to me, and we had a lot of catching up to do, and where she went, so went the kids. But I love kids. I find them fascinating, if at times vicious, creatures. In this case I watched them echo the kind of pretend games I played with my brother as a kid. The dragon kept all the My Little Ponies captive. And the children were separated and taught things like reading was bad so they wouldn't learn and rebel. Could they use the crystal ball that the ponies were hiding because the dragon would become that much more powerful if he ever found the crystal ball? I never did figure out how the plastic and furry insect puppet fit in, other than it was evil too. 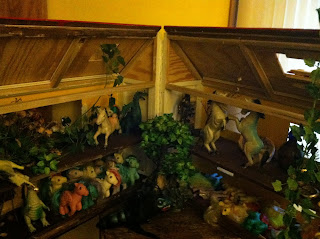 Not only did these kids turn a mismatched collection of toys into something that sounded like a fantasy plot in the making, but they did it together. Of course the oldest had ultimate power, but they accepted everything the others said. If Milo grabbed the big insect and inserted it into the game, the girls altered their universe to make that insect
not only at home, but without question.

It reminded me of a developmental psychologyuiop study I read as an undergrad. Children were watched as they worked almost as if one unit. They made up words. Not only did the other children not object to or question these words, they appeared to automatically have a working knowledge of the meaning. The example was "stocks" A child in knee highs referred to her knee highs as "stocks".

If you asked, you learned that they were stocks because they were half way between socks and stockings. The adults had to ask. The children already knew and soon all used the word stocks when referring to knee highs. At some developmental marker, psychologists claimed that our brains became more left brain wired, and we lost this brain plasticity. But here's the thing. Speculative fiction readers and writers don't.

Sure, we get really pissed if someone breaks the rules they have set up for their world, but as long as they feed us information we need when we need it, not all at once and not obtrusively, we go with the flow. Unicorns have all but herded into the sea by a gigantic red bull. Okay, break it down, we've heard of unicorns before. But Peter S. Beagle makes up his own set of rules for how a unicorn acts, thinks, feels, and looks--very different from the hundreds of other fantasy novel's unicorns, and we roll with it. So there is this gigantic red bull. That's fine. We may expect some kind of explanation of the bull eventually, but right now this one unicorn is going to find other unicorns who have been chased down by a red bull. That's what we know and we're going with it. It is the "stocks" of the adult world.

People who don't, as a rule, read speculative fiction, get tripped up (okay, maybe not in my example. Everyone loves that book so much they steal it and put it in "literary fiction". Bastard thieves.) immediately. They flip back and forth looking for the explanations they don't have yet or may never know. What the hell is this red bull doing in here? Is it a mythological concept they missed while reading Joseph Campbell? They don't get why it is chasing unicorns. Did they miss that paragraph? Why didn't the unicorn know and why didn't the red bull get her too? Everything you set in front of them, they immediately question.

They need answers. They need a flow chart. They need a scholarly article about unicorns and all the implications of them in this book before they can start reading. But like I said, some fantasy books transcend and the grown ups are willing to play. Look at Harry Potter.

However, speculative fiction readers are always willing to play. We trust. We take what is given us, and we may question, but we know to read more and the author will spin us a new born world. A world where dragons guard My Little Ponies ans crystals can mean the power of life or death. If someone says the equivalent of "stocks", rather than questioning them, looking it up in the dictionary, or challenging the word's existence, speculative fiction readers simply incorporate "stocks" into their worlds. We know. We don't need proof.

Cars possessed by a dead girlfriend? Okay. After the atomic bombs go off the healers wander around with three snakes to heal people, but everyone must steer clear of the contaminated areas. Okay. Angels were constructs of people who wanted to hide that a space ship controlled their new technologically backwards world. Sure, and kudos for crossing spec. fiction lines. The farther an author can get away from the well established concepts, the more excited we get. Our brains still stretch like silly putty. In the words of Alice Walker, we "always try to keep faith with the child [we] have been."
Posted by Bets Davies at 1:32 PM