There is little that I hate more than the myth of the tortured artist.  It nearly killed me.  When I descended into depression and soared into addictive mania, I took them as my goddesses.  They were part and parcel to me being an artist.  The drugs I did trying to unsuccessfully control my moods were just part of being an artist.  I didn't invest in my recovery even when I knew what was wrong.  I was afraid if I lost my "eloquent" depressions and "productive" manias that I would lose my creativity.  Artists were supposed to be crazy, right?

Okay, most of us are eccentric but the myth that self destructing is artistic destroys people.  It can kill people.  It is bullshit it.

Scientists have found a genetic correlation between mood disorders and creativity.  That is correlation not causation.  I got a tattoo and wrote the story that got me into Mills to remind myself of the difference. 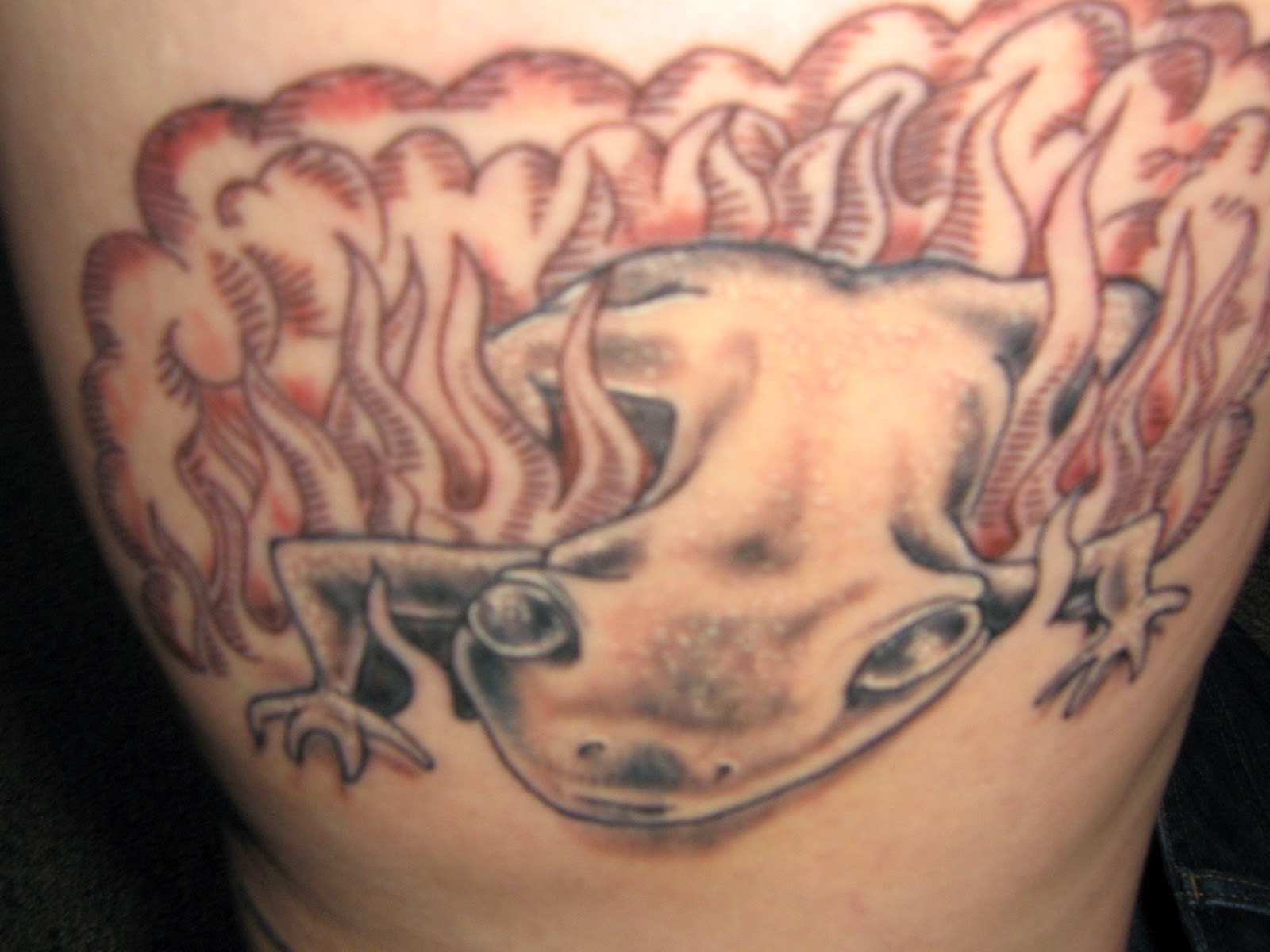 My tattoo is of a salamander crawling out of an old school medieval wood cut.

See the thing is, even if there is a link between mood and creativity, it is only a correlation.  That means I know lots of people who are creative and have no mental illnesses, and people with mental illnesses who are completely uncreative.

There is nothing creative about a mood disorder in and of itself.

When you are depressed the world is like decaying plastic.  Your mind descends in a glue of failing cognition.  I'd get lost in my own dorm.  All I wanted to do was sleep.  I hurt like hell.  The only thing stopping me from killing myself was that I was too depressed to figure out how to do with it.  Depression is static.  Depression descends your brain into a tar of emotional hell.

I will give you that there is this perfect hypomania (small, not very high mania) where the whole world interconnects and your brain dances and you can create like hell.  Mania is the most seductive drug I have ever met.  It is the pure neurotransmitter form that drugs attempt to replicate.  In comparison to a good mania, a euphoric mania makes ecstasy look like a rainy, Monday morning when you have a cold and there is too much paperwork.

Treatment for bipolar disorder is fairly advanced.  The illness can be deadly because people become addicted to the manias.

The problem is like every drug addiction, you can't control it.  You can't keep that perfect mania, even if you force it by losing sleep on purpose or doing other drugs or any of the ways you can push yourself into a mania.  That perfect mania speeds up.  All of the sudden you can't sit still.  The thoughts that raced through your brain with such synchronicity now speed so fast they break apart into fractions of of images and words.  Your thoughts jump so fast you start out saying or writing something in one paragraph, and finish the sentence with half a thought from paragraphs later.  You can't sit still.    Like the little girl in the red shoes, you feel like you are now dancing till you die.  You try everything to slow down, but without the proper medication, the only thing beyond a mania is a drop into depression.

Unless depression already entered the stew in a mixed mania.  In a mixed mania, your thoughts still race.  The world is unrelentingly barrages you with images and movement but instead of coming with euphoria, you are depressed and manic at the same time.  Every unrelenting emotion tells you the same awful thing about yourself that depression does, but instead of slowing you down till you can hardly move, you speed in your horror, and have more than enough energy to kill yourself.  Mixed manias are the most dangerous times.

Still, people want to keep all of this because they are afraid of losing their creativity, just like drug addicts justify their addictions by being "artists", and how artists justify their drug addictions.   Being stable has been the best thing for my creativity.  I have a steady supply of inspiration.  Instead of working when I am "inspired" and living in hell the rest of the time, I write like any working artist--on a regular. scheduled basis, and as a much happier healthier people.

This myth of the self destructing artist is insidious.  The salamander image originated in a memoir short piece about an experience I had with a group of intellectuals who worked at a used bookstore with me and one who ran pub trivia every week.  There we were, sitting around playing Risk.  I despise Risk, but I had only started working and the store.  I respected and liked this crowd and wanted to be friends with them.

I zoned out to the boredom of Risk, when I tuned into the conversation.  Philip K. Dick never would have written the way he did if he wasn't a drug addict.  Wasn't he brilliant?  I quickly lose small ability to small talk in this debate.

Maybe did never would have written the way he did if he weren't an addict, was it worth him being an addict?  What if he had written differently, but as well, and maintained a long career?  They don't think so.

Sylvia Plath.  Let's take the destructive and depressive goddess herself.  If Sylvia Path had never been depressed, she never would have written The Bell Jar.  Which was worth more, Sylvia Path, or  The Bell Jar?  Say she had never written that particular piece of novelized memoir about suicide attempts and depression.  Say she had written something different, on an even keel.  And since then she wouldn't have stuck her head in a fucking oven and killed herself, she would have had a lot more time to write splendorous things.  What if she never wrote at all?  What was the entire cannon of Sylvia Plath worth next to the games Sylvia never played with her children?

Some of them still said Sylvia's writing was worth more than Sylvia.

After a knock down drag out debate that left me shaking with anger, I had the sudden feeling of being alone in a room.  No.  I wasn't alone  I was hanging out with the myth that had almost killed me.  Surprisingly, I still became their friends.  I never did agree with them on Sylvia though.